While Rome was burning New Orleans was flooding, Bush... 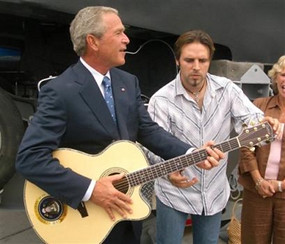 When the Feds finally got around to allowing the dehydrated people from
New Orleans to get on buses to the the Astrodome, they neglected to give some of the people
water for the ride. So, after the severely dehydrated prisoners were released, evacuees
were rescued, they had to ride over three hundred miles, past
convenience stores and restaurants, without being allowed to stop and get a drink of water.

Here's part of a post from the newsgroup sff.discuss.emergency on sff.net telling about the condition of evacuees arriving at the Astrodome in Houston:

"When the first of the survivors arrived, they were hot, tired, dirty,
hungry, thirsty and very, very grateful.

A few days later when survivors arrived many were too weak to get off the
buses by themselves. Volunteers were having to bring water to them so they
could start to rehydrate enough to function enough to get off the bus and
into the shelter.

First thing off the bus (after water) was shots. At least tetanus, but she
couldn't remember what the other one was.

D often works first aid stations at local events. This is Houston, heat
prostration is a fact of life in large crowds on hot days. She's used to
see the all but magical ability water has to revive someone who needs it.
She (who is never) was speechless trying to convey the horror of someone
who's been without water for days.

There was no water on the buses.

They've run out of cots.

D yelled at one of the volunteers who was throwing out some collapsed
boxes. Instead the cardboard was made available to the folks on the floor
of the Dome (it's a concrete floor). It was quickly snatched up and used
as rugs, padding, you name it.

There is a *massive* amount of excellent food on hand.

Lots of clothes have arrived, but there are some interesting shortages.
(Men's underwear is thick on the ground. Women's is no where to be found.)

One of the first things survivors asked for were brooms so they could keep
their little area of the floor clean. Red Cross provided their standard
cleaning kit to anyone who wanted one."

Waiting to Be Released