Melon and fruit stickers are going to become obsolete. There was an
article in the New York Times a while back saying that the stickers are
going to be replaced with numbers that are "tattooed" into the melons with
lasers.

I've always loved these stickers. I've been collecting them for years,
but I didn't take care of my collection because I never thought they
would be discontinued. I'm going to start photographing my stickers and
some of the prettier ones I see at the grocery store. I'll put some of
these photographs in my journal. 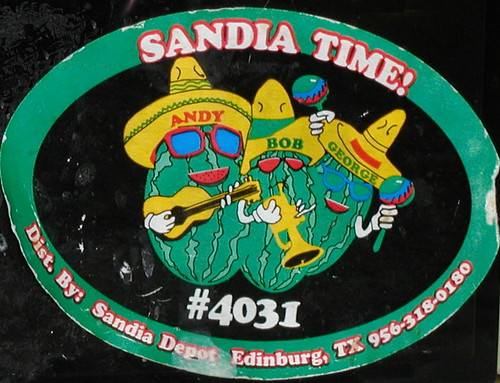 They're gathering 'em up from miles around...

From the New York Times:

"Still, a contentious debate lingered about whether the response was
slower because its victims were predominantly poor and black -
criticism the administration has pointedly rejected. The only
African-American senator, Barack Obama of Illinois, said that the
feeling among many blacks was clear.

" I think that, in the African American community, there's a sense that
the passive indifference that's shown towards the folks in the Ninth
Ward of New Orleans or on the West Side of Chicago or in Harlem - that
that passive indifference is as bad as active malice," he said on
ABC-TV."
Collapse