I heard a noise outside yesterday and went out in the yard to see what was going on. Whatever made the noise was nowhere to be found, but as I was turning around to go back in I saw two lizards pacing along the connections for the air conditioner and glaring at each other. One would move up a few inches, flash its pink chin thing and bob up and down. Then the other would move even further up its pipe, curl it's tail just so and bob up and down. And so on, and so on, and so on.

Finally one of them darted over to the other's pipe and stood in front of the other guy. For a moment it was all about flashing pink chin things and bobbing up and down along with some serious tail curling. Then the guy who had crossed over lunged forward and took the other guys head completely in his mouth. The loser thrashed wildly around, then it broke free and jumped back. The biter bobbed rapidly up and down for a moment and the pair moved this way and that with more tail curling and flashing of pink things.

Then I inadvertently spooked them. When I first saw the lizards I was turning to go inside. I had frozen mid-turn, standing with my back to them, my shoulders and neck turned toward them and my feet not quite flat on the ground. It was an awkward pose and my muscles finally gave out.

When they saw me, the pipe crosser scurried back to his pipe. I tried not to spook them further as I headed in to get my camera. When I got back out I managed to get one shot before they went their separate ways. 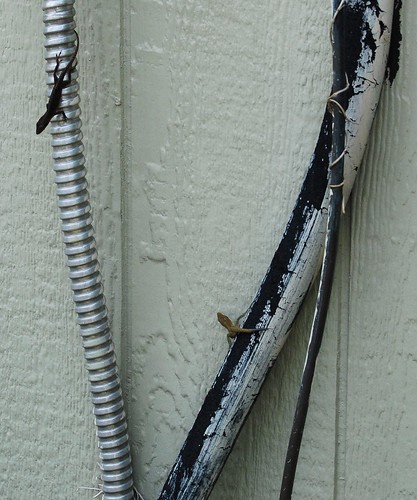 Does anyone else realize that at least part of the source of the increase in gas prices is the weak dollar? As the dollar goes down, it buys less oil on the international market. So we pay more dollars per barrel and thus more dollars at the pump.
Collapse