The truck is pretty much packed. G and I are heading out to Kerrville early tomorrow morning.

We are not going to the Festival quite yet. It doesn't start until Thursday. Tomorrow we are going to a pre-festival event called Landrush. This is where people start forming a line with their vehicles on Friday and by Sunday the line is hundreds of cars long. Then they open the gates and the people drive to their campsites and set up their stuff.

Landrush is stressful because people have "regular" sites they are very attached to, but new people may have scoped their site out and want to camp there. The general policy is that people who have camped in a spot for years have priority, but it can get nasty if a new person got there first and doesn't want to yield. So I usually get out early on Friday so I'm way up at the front of the line. The Landrush line is fun. You're in it for two days, and people generally camp in or next to their vehicles. Unlike in the regular campground, your neighbors in the line are totally random people. It's a great way to make new friends. And there's always some really good music going on so it's fun to wander around.

This year I had other things to do so I didn't go out early. Our campmate Roy went out on Friday afternoon and got a spot in line. I'm going to drive out there and park the truck off to the side. I'll ride in with Roy and we'll stake out our camp with tarps and Dining canopies. Then I'll go back and get the truck. I just hope it all goes smoothly.

After setting up camp, which will include "embedding" my truck in "my" spot and setting it up as a camper, I'll get a ride back to Austin with some of my other campmates.

During the Festival, I'll be kerrmuting because G and I have things we will have to attend to here in Austin. I hate kerrmuting. I just want to move into camp and stay there. But some years that just can't be.

Here's a little Landrush history. In the past, the line would start as much as a week ahead of time. It was almost a festival in its own right. But then they went and made a rule that the line can't start until Friday morning. Way back before they invented Landrush, you could arrive way ahead of the festival, set up your camp and then help out around the ranch getting things ready for the Festival. But then people started setting up and not working. So the festival started making rules. I miss the old free-form days. I would go out a month or so early. Sometimes I'd be the only person living in the campground. It was so quiet and  lovely. I think part of my Landrush stress is that I miss those days so much.

We got to Kerrville about an hour before Landrush. Roy was in a good spot in the line, but we got a ride in with people who were closer to the front of the line. They dropped us by their camp and we ran over to our camp only to find...tarps and poles all over the ground. I got so mad I thought my head would explode. Then I heard someone yelling. I looked up and saw someone coming toward me from up the hill. It was obviously their stuff that was all over my camp. I was so pissed that it took me a minute to realize that it was my campmate Paula walking toward me yelling, "it's OK, it's our stuff!"

It turned out that Paula and Cyndee had gotten in even closer to the front of the line and set down tarps and poles. In the end there were no hassles, only tons of my campmates, so set-up went really smoothly. When we were done, most all of us went for lunch at Mamacita's where Davy Crockett plays fiddle at the Alamo under the light of the full moon every fifteen minutes or so. Then Paula and I took turns driving back to Austin in her van. 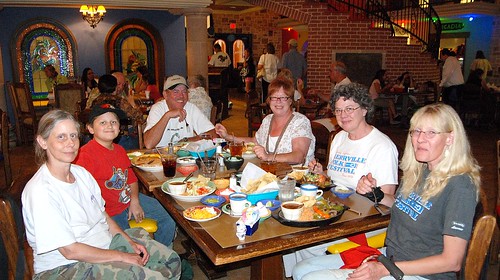 Here's a link to all of my Landrush 2008 photos.
Collapse