I've always wanted to go to Africa. I just found a Flickr account called Real Africa that has beautiful photos of some of the lodges and camps that travelers can stay in when they go there. It makes me want to leave today.

The pictures there also gave me some ideas for the land. The tents and lodges look so comfortable and nice.

The U. S. Supreme Court has ruled that the prisoners held at Guantánamo Bay are entitled to the same constitutional rights as anyone else tried in a United States court of law.

From the New York Times article about the decision, "“To hold that the political branches may switch the Constitution on or off at will would lead to a regime in which they, not this court, say ‘what the law is,’ ” Justice Kennedy wrote, citing language in the 1803 ruling in Marbury v. Madison, in which the Supreme Court articulated its power to review acts of Congress."

Of course the Bush Babies are pretty upset. Justice Scalia played a fear-monger card, saying the ruling “will almost certainly cause more Americans to get killed.”

Treating people as human beings has always been risky. But I think America is up to the task.

Ticks gross me out. After taking some pictures of it, I killed this tick. :-(  I think it's an American Dog Tick. I'm pretty sure I picked it up out at the land, but I found it on my hat when I was using the computer back at my rent house. 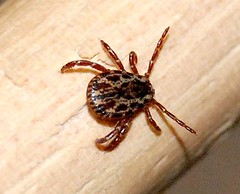 On a different note, when we were leaving the land yesterday, a john and his hooker were heading down the road to the land. I stopped them and told them the people who owned the land around there had hired me to do security. They said they'd just drive down the road a bit, then turn around and leave.

I told them no, they had to back out (about five feet) and leave NOW!

Their eyes got wide, they said OK, and left in a hurry. It was pretty funny. I hope I scared the hooker enough that she stops bringing her customers out there.