My Firefox completely stopped working last night. The hourglass would appear and for a moment it would appear to be loading. I'd see a small pulse on my ZoneAlarm monitor, but the Firefox screen would never come up. Even though the screen didn't show, when I checked my Program Manager, Firefox showed as open. It was quite frustrating.

So I switched to Netscape, which didn't have all the features I needed, and I started right in trying to fix Firefox right away. I worked late into the night and continued on as soon as I got up this morning. Every time I thought about giving up, I'd hear

ndozo 's voice telling me there had to be a solution.

Well she was right. I finally found a workaround by creating a new user profile for Firefox. But before I could do that, I had to disable some stuff. I don't remember exactly what, but it was pretty much everything that started automatically at start-up except ZoneAlarm, Grrrrr and some Windows stuff that looked important.

Soon I have to figure out how to get my bookmarks over here. But right now I'm going to take a break.

Here's a picture that shows how I feel about my computer right now. 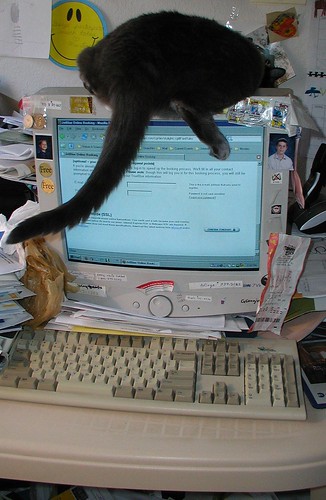