I was driving out to the land today and I saw a coyote trotting along in the field where people like to dump trash and/or have sex. I think it was spooked by the truck. It ran through the field alongside the road and then into the woods across the street from my land. I was amazed. I didn't get a picture of it, but I'm happy enough just to have seen it.

Then, I thought I saw a bees nest on a giant ragweed stalk over where the Mexican buckeye was. So I started to walk over to it. "It" turned its head, looked at me for a moment, spread it's ginormous wings and then took off very silently. It wasn't a bees nest at all, it was a huge owl. The light was on the dark side of twilight, so although I tried, I didn't get a picture of the owl either. But now that I know what to look for, I hope I'll get one soon.

I also saw three deer in the lower meadow and then later I saw another one. And I heard lots of birds. Also, while I was down in the lower meadow, I heard a wind-like sound move through or just above the woods east of my land. It sounded like gas escaping, or a low flying plane with it's engine off or maybe a bottle rocket without the whistle. The sound was easy to hear, but not too loud. The source of the sound seemed to be moving at about treetop level from the north to the south (toward the river and the airport). The sound stopped abruptly when it was almost to the river.

In addition to cool critters and curious sounds, my rain buckets are full and my new-to-me rain barrel is about a quarter full and it doesn't seem to leak (edit -- it does leak when it gets full). 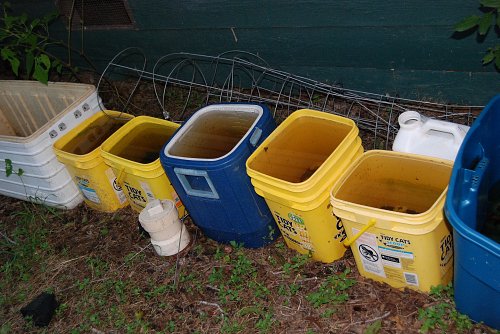 Any of you folks with dogs should read this article about a dangerous dog toy, It's a ball that dogs get their tongue stuck in when it breaks open.

But the best decision would be not to let your dog play with the toy.
Collapse