New York City has hopped into bed with a developer to turn Astroland in Coney Island into a New York City version of the Mall Of America.

The Coney Island Development Corporation is a group whose members have been appointed by the Mayor and other officials from the City of New York. If you look at their website, you can see the images of the shopping mall they intend to build. It will not be an amusement park, it will be a shopping mall with a few rides. The wonderful funky place that Coney Island is today will become the stuff of legends.

Mr. Benguiat called me back about twenty minutes later and proceeded to berate me nonstop for about five minutes without letting me ask a coherent question or make a coherent statement. He claimed there was nothing the city could do to stop the development. He said that it was totally up to the owner of Astroland and told me to call the owner and complain to her. He was extremely belligerent and refused to let me get a word in edgewise. He referred me to thecidc.org website and told me that members of the board of the CIDC were appointed by the Mayor of New York and other city officials. When I asked him if the city was behind the new development, he began berating me again. I told him I wanted him to stop being rude to me and asked him to please answer my questions. He said he wasn't being rude. When I said that when I put the recording of our conversation online, the people who listened to it might disagree with him, he seemed to be taken aback at the thought that I was recording his outburst. He then stated that if I was recording the call, he would turn his recorder on as well. There was a moment of silence and then our call was disconnected. (I may post my recording later if I can figure out how to digitize it.)

Before I spoke to Mr. Benguiat, I thought this was a dispute between a landlord and a tenant who had been somewhat scammed in a real estate deal. During our conversation, I began to think that there might be more going on. The utter refusal of Mr. Benguiat to talk about the situation in a rational manner was pretty strange. That and the fact that Mr. Benguiat, the person whose phone the Brooklyn Borough President's office transferred me to when I called to complain, is on the board of directors of the Coney Island Development Corporation seems a little odd to me as well.

To send a complaint about the closing of Astroland to the Mayor of New York, call 212-639-9675 and tell the operator you want to send a message to the mayor.

Astroland is worth saving. 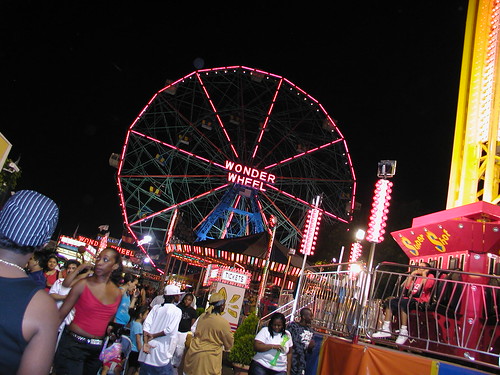