I got to the ranch about 8 pm Friday night. I ended up behind my old friend Mary Potter, next door to Bill McNeal and close to a bunch of other folks I knew. But the best tihing about the Landrush line is meeting new people. The new folks this year were Mary Potter's friends Ruthann and Richard (I think that is their names) who had a solid wood picnic table on a trailer. It was a nice place to sit and eat.

Saturday morning, Bill McNeal told me that Phat Jack had died around 5:15 am. I was glad to be with a bunch of Kerrverts so we could swap Phat Jack stories. I'm really going to miss him. I hope that there is a heaven and that Jack and Toby are up there, setting by a campfire swapping stories and drinking margaritas.

After I finished my coffee, I worked doing sticker eradication in the theater all day, removing thistles, greenbrier and other sharp plants. Sunday morning around 10:30, the line became a caravan and we moved on into camp. I got in fast and threw out stakes. Then Liz, Joe,  Austin and I put up our giant canopies and other shelters. Joe and Austin left and Liz and I staked out tarps. After Liz left, I relaxed in camp for a bit. Then I found a plastic bag from Target and flagged all of our lines so no one would trip over them in the dark. It was about 8 before I left camp.  We have plenty of neighbors watching our stuff. John should be there by Wednesday afternoon, and with any luck I'll get there Thursday night.

Here's the Landrush line about fifteen minutes before it started moving: 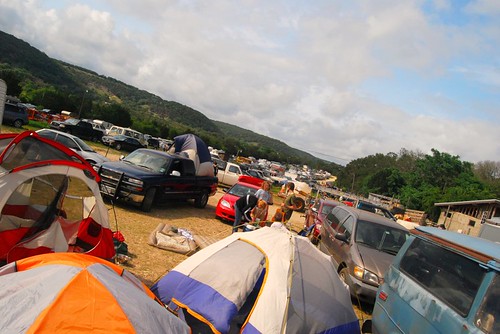