G and I went to an Austin City Limits taping of Trombone Shorty tonight. The music was good and the show was really fun. Here's a cell phone picture of us on the set before the show began: 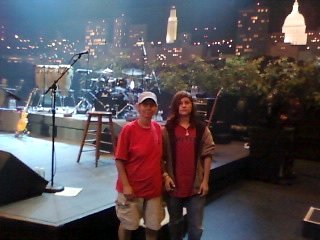 Tomorrow I go back to working for the census again. I don't know if I'll be enumerating or working in an office, but the job is supposed to last about two weeks. I hope it lasts longer, but two weeks is better than none.
Collapse