From the AISD website, "Due to inclement weather conditions, the Austin Independent School District will close on Friday, February 4, 2011. All schools and offices will be closed, and all after-school and extra-curricular activities are cancelled." 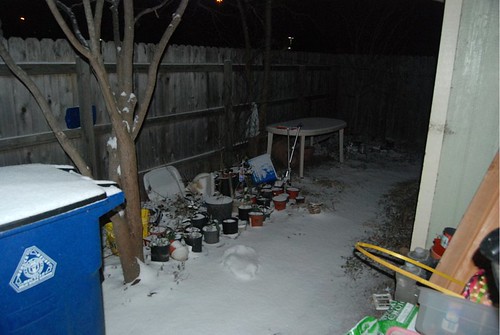 The National Weather Service says it's going to get down to 16 degrees tonight. It's supposed to warm up to the 50's tomorrow and stay out of the teens after that. It's going to be nice not to have to remember to drip the faucets, but the cats are going to miss their bathtub water fountain.

We had a nice relaxing day. We started out with a snowball fight between me, G, my landlady and her nephew. We also made a crummy snow Jabba The Hut. The snow was not good for making a snowman, but it made OK snowballs. After that we had french toast and hung out.

I got to watch my cat Skeeter discover snow. He stepped out the door and stopped on the dry part of the front step for a minute to take a hard look at all the white. He seemed to be making sure that the yard was still there underneath. Then he walked into the snow. Unlike most cats, he was completely unconcerned by the feel of it on his paws. He just waded right in as if he walked in cold wet white stuff every day. Then he noticed the bits of snow that flicked off his paws as he walked and he chased them and pounced on them and tried to bite them. After a bit the feel of snow around his mouth seemed to get to him and he stopped chasing and cleaned his face. Then he just wandered around like he normally does. So I got bored and went inside. After a while, he came in. He went back out for a bit later on. Overall I think he kind of liked the snow.

Over on Facebook, a friend of mine posted a link to a nice Snow Day song. Click here to hear it.
Collapse