Kerrville was great. I ran for a position on the the board of directors for the ranch and lost. I joined the Kerr History crew. I fell afoul of a very rude security guy and found it to be quite amusing. I made sure he got feedback from his boss and his bosses boss that his behavior was inappropriate. If I had my way, he'd be off of security. But at least he knows he screwed up. The funny part is that I was very much in the wrong and if he had been Kerrtious I would have changed my evil ways (at least for the evening). But because he acted like such a bullying jerk, I waited until he was done and then I wandered off and went back to continue my flagrant violation of the all-important campground rules.

G is still on the Mixmaster crew (the same crew as the afore-mentioned jerk) and is a very reliable and responsible worker. He worked the morning shift and I never had to wake him up or remind him to go to work.

It didn't rain the entire time and the dust was all over everything.

Liz and I went swimming in the pool at the Y.O.

Shannon down at Camp C.A.L.M. revived bawdy songs night and it went fairly well and hopefully it will pick up steam from there. I played Baby Kittens and lots of people sang along. There were some good songs. My favorite was a funny song about a guy who "Woke up and went downtown with a Woody...Guthrie hat on." It went on to make more Woody jokes such as how the girls admired his Woody...Guthrie T-shirt. I hope this is the beginning of a Bawdy Song Night revival.

G was helpful setting up and taking down camp.

We got home in time to see X-Men: First Class at the Alamo with Rich. It was a fine movie. G liked it more than I did, but I did like it. I might have enjoyed it more if I hadn't been so tired. I actually fell asleep a couple of times.

I wish I was back at the ranch, but it's nice to be home. 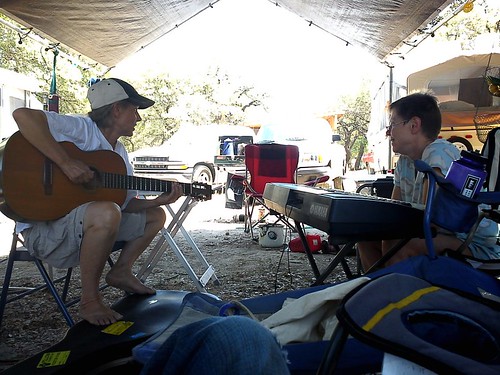