It's been quite a week.

It started with over 24 hours of no power because I didn't pay my electric bill, and then when they went to reconnect the power, they connected the meter at the wrong house. It was not a big hassle (and I learned a lot about my emergency light set-up that I will post later). But it was a weird start to the week.

Then, a couple of days ago, my cat Chloe's back legs stopped working right. She was old and had been slowly fading, and the vet and I agreed that it was time to put her to sleep. It was rough.

Yesterday I buried her. I had to cut a path to the cat-burying place and I'm somewhat out of shape, so the whole process was tiring and sad. But I got her planted along with a few acorns, a couple of Mexican plum pits and some wildflower seeds. Hopefully I'll get some kittens, an oak tree or two, some plums and a bunch of pretty flowers out of the deal.

Then this morning I woke to a noise in, or near, the house. Of course for a moment I thought it was Chloe. Then I figured it was some animal wandering under the house. So I got up to check. Half asleep, I walked in the front room and there was a guy standing there, so I punched him in the face. Then I grabbed him by the shirt and started yelling at him to "GET THE FUCK OUT OF MY HOUSE!" I shoved him to the door, punching him and yelling and he opened the door and I pushed him out. I chased him down the driveway yelling and punching him until it dawned on me to make a video of him. I made a crummy video and then followed him down the street yelling while I called 911. Miraculously a game warden was driving by in his truck, so I flagged him down and he detained the guy. The 911 operator really wanted me to go home, so once I was convinced the game warden would keep the guy til the cops got there I went home. Early on in the situation, I established he was just a homeless guy looking for a place to sleep. The cops have charged him with criminal trespass. I'm still pissed at him.

So that was my week. My arms are tired from burying my cat and my hand hurts from punching the guy and I really wish my cat was here right now to sit on my lap. I miss her so much. 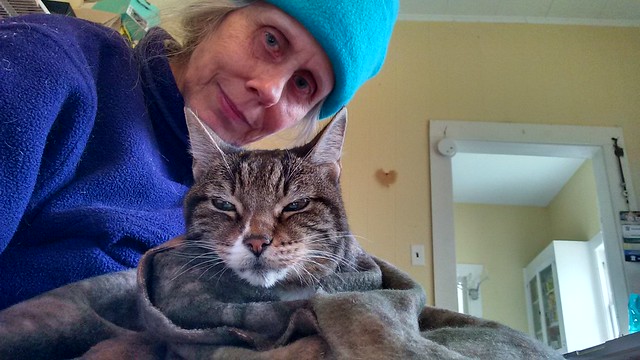 And you to whom adversity has dealt the final blow,
With smiling bastards lying to you everywhere you go,
Turn to and put out all your strength of arm and heart and brain,
And like the Mary Ellen Carter rise again...

from The Mary Ellen Carter by Stan Rogers