Driving on the road by the land yesterday, I saw a really fat Texas Spiny Lizard. It sat still long enough for me to take a picture: 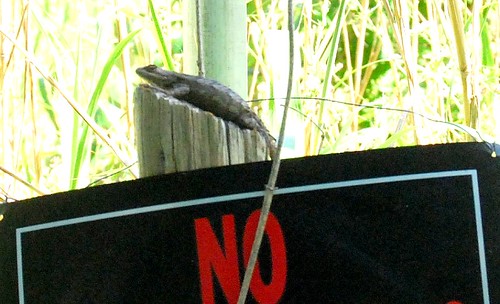 Later I saw another really fat Texas Spiny Lizard. This one was sitting in a hole with its head and front legs sticking out. I thought it must be hiding in the hole and catching bugs as they walked by. I'd never heard of a lizard hunting like that, so I was interested. I tried to take a picture, but the lizard ran away. I took a photograph of the hole with my finger close by for a size reference: 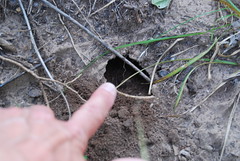 Before I left, I went back to the hole to see it the lizard was back in the hole. It wasn't. The hole was filled in, but the lizard was right nearby. I took a picture of it and headed out:

By the time I got home I had figured out what the lizard was doing in the hole. It was the same fat lizard I first saw driving in. But it wasn't fat, it she was pregnant. When I saw her in the hole, she was laying eggs. When I saw her later on, she had buried the eggs and was resting. And I disturbed her twice. I feel bad about that. :-(

This morning, I blew up the photograph I took of the hole. I could just barely see a lizard egg down inside: 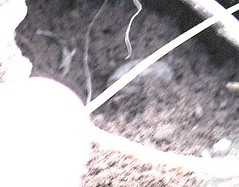 I'm pretty sure it's not a pebble, because the lizard dug dirt that I'd worked for some plantings I did last week. I cleaned the dirt really well and taking out any rocks and pebbles as I went along. So I'm pretty sure that's a Spiny Texas Lizard egg in the middle of the picture.
Tags: nature, the land
Subscribe