This evening, G and I went to pick something up from a friend who was with her weekly fencing group. While we were there, George and I tried fencing. You know, the activity with masks and sharp pointy things and all as opposed to the post hole digger and wire activity or the illegal activity that involves messing around with stolen goods. We both had fun and plan to go again.

Before we left our house, I disposed of the dead rat. Within an hour after it died, its eyes had become cloudy. By the time I went back out to dispose of it (about two hours after it died), its eyes had turned bright white. It looked weird and icky. Click below if you want to see a picture of a dead rat with white eyes. 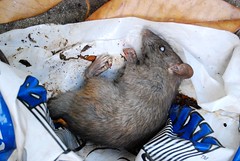 The brown stuff on the plastic around the rat is from plant stuff that was around where the rat died. But one of the rat's front paws was cut and there is a smear of blood next to the cut. I'm figuring (hoping) that the rat died from rat poison. I'm hoping that the poison is not where my cats can find it. I'll be watching them really closely for a while.
Tags: nature, rent house
Subscribe