My Yard Hippie Is The Best!

When a bad guy tried to break into the house a couple of weeks ago, in addition to ripping down a shelf and opening a window, he splintered the door to a small utility room where the hot water heater is. Last week I tried to make it so it would close, but I got stung by a hornet and gave up. So I asked my yard hippie to knock it somewhat together and nail a board across it. I didn't expect it to be very solid, but I wanted it to keep the bad guy out until I got it fixed.

My yard hippie did an amazing job. I won't have to worry about replacing it until the house is ready for move in. My yard hippie is the best! Here's a picture of his repair job: 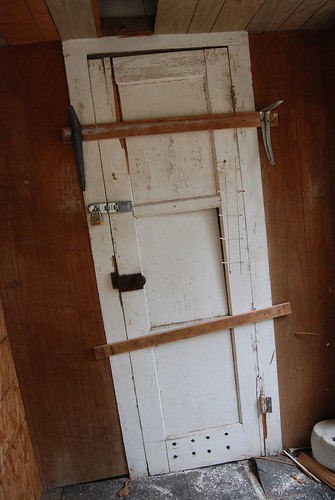 And here's a picture of my yard hippie at his day job:

He stands out in front of the Texas Capitol Building holding various protest signs and talking to people. As you can see, he doesn't mince words on his signs. But he is quite the gentleman when he talks to people. He says he actually prefers to talk to people who disagree with him.