Nature, Red In Tooth And Claw 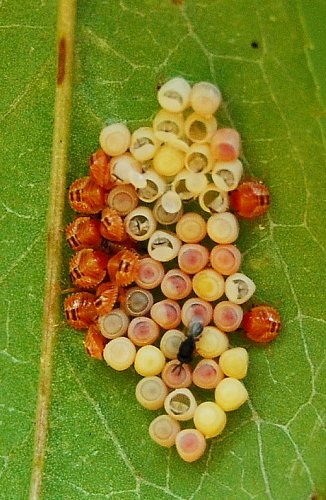 In this picture, in addition to the orange bugs and the eggs they hatched out of, there are two tiny wasps, a black one (recently emerged) and a white one just emerging from an egg at the top left. (It will darken soon). They are probably parasitic wasps emerging from parasitized egg cases. The wasps go through their larval and pupal stages in the egg case and then emerge as fully grown (albeit tiny) adult wasps. While in their larval stage, the wasp larva get their food from the egg's original inhabitant.

When I took the top photograph I didn't see the wasps and I thought that the orange bug larva were just a different kind of egg.

The next day I looked at the leaf and found a nymph, possibly a lacewing nymph, sitting on the top end of the leaf eating something. I was taking some photographs of it when I bumped the branch and the nymph dropped its food. I felt bad, but it turned out the nymph didn't mind. It scooted down the leaf, grabbed another bug, dragged it back to the top of the leaf and began chowing down. Meanwhile, back at the egg cases, the other bugs sat together in happy oblivion. 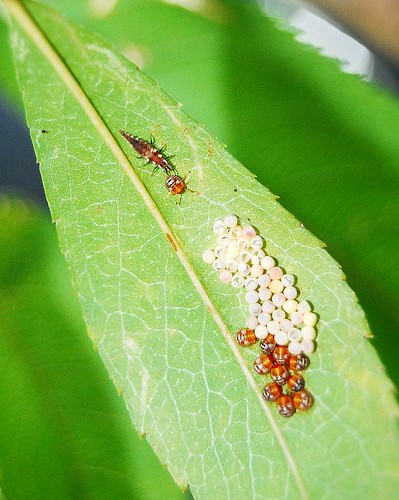 This incident reminded me of a song from a Buzz Lightyear CD that we got in a box of cereal a few years ago. It was written from the perspective of some toys in a grappling game. The song is an amazing commentary on religion and death. It's called...

There's nothing quite as glorious
That makes you more notorious
Than to be chosen, yes
To be chosen by The Claw

Who chooses now if well stay or go?
The Claw, The Claw, The Claw
Who doesn't care if we have no nose?
And little round bodies with no toes
Well here I go! (whadda you know!)
Yes, he is chosen by The Claw