ndozo had made my bedroom up nicely, stocked the house with food and left us a car. But she couldn't have predicted that the heat would break the night we arrived. She had turned the furnace down, so I figured the house would warm up fairly soon after I turned it up. The living room was fine and G settled in there to watch cable cartoons while I settled in the kitchen to play online. About an hour later I realized that I was chilled to the bone. I called ndozo and she quickly determined that it was the furnace rather than any error on my part that was causing the problem. So we loaded up the beds with blankets and went to sleep.

This morning the living room didn't have heat either. I called the repair guy and then, after breakfast, G went out and played in the snow. A while later I joined him. We had a great snowball fight in spite of the fact that this snow is too fluffy to pack well. Then I taught G to shovel snow. He lasted about a half an hour before he got bored and went inside. I kept shoveling because it was much warmer shoveling snow outside than it was sitting around inside.

The repair guy is fixing the furnace right now. The baseboard heating pipes are gurgling with water. They sound more like downspouts in a gullywasher than heating pipes. I trust that he knows what he's doing. He promised me that we would have heat by the time he leaves. But if we don't, I can stay warm tomorrow by shoveling the walkway to the front door. 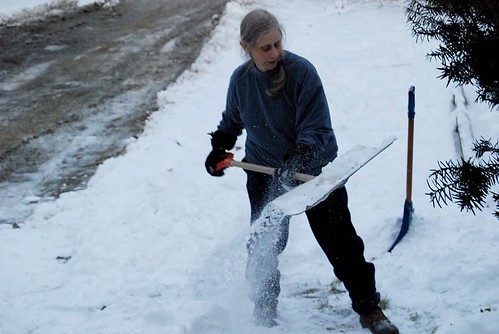