I'm exhausted. I spent the morning getting tests done for the UT medical study that I'm in. Today I totally earned the $100 they will pay me when the study is over. It was an intense morning.

First of all, I had to go there without having my morning coffee. That was tough in and of itself. Though actually I didn't feel that bad. I had gotten up early and had a shower, so by the time I got to UT I was pretty wide awake.

The first test was easy. I sat in a chair and they took my blood pressure and an EKG while I blew in a tube a few times. The odd thing was that I had a tiny blood pressure cuff on my finger. It squeezed my finger in a tiny way and it felt funny.

Then I moved to the exam table where they started by taking more blood pressures and doing an ultrasound of one carotid artery while measuring the pressure in the other.

Then they put a frame on my head to hold the ultrasound device so they could take an ultrasound of the blood in my brain while they tormented me with weird breathing activities while I had to lie very still. I had to breathe through a mouthpiece like one on a scuba regulator except it was flimsy and didn't fit right. They plugged my nose with a nose clip and had me breath air with carbon-dioxide added to it. I think they switched between CO2 and regular air a few times. Then I had to hyperventilate for about 20 seconds. They used a metronome and I had to breathe in on one beat and out on the next. I ended up quite dizzy. By this time the frame thing was hurting my head, my shoulder hurt from lying so still, my nose itched and I really had to pee. But, instead of getting the frame-thing off, moving my shoulder, scratching my nose and going to pee, I had to lie still while they did the whole thing over again. Fortunately the folks doing the tests are funny and nice. So it actually wasn't that awful. But I was really glad when they took off the frame-thing and the nose clip and I was free to pee.

Next they put three BP cuffs on my right arm. The tiny one on my finger, a little one on my wrist and a regular one in the usual spot above my elbow. They inflated the wrist cuff enough to cut off pretty much all the blood to my hand and had me squeeze a hand exercise device that measured how hard I could squeeze. Then they deflated that one and inflated the one above my elbow to cut off the blood supply to my lower arm. After about ten minutes my arm had really bad pins and needles. Then they had me squeeze the exercise thing up to a certain level about ten times. Then they tightened the wrist cuff and released the arm cuff. Then they released the wrist cuff. The whole time they were doing this they had a very sensitive loop of wire with mercury in it measuring how much my arm swelled up. This test was uncomfortable, but not as bad as the breathing thing where I had to be totally still.

Then they moved to my left arm and did more cutting off of my circulation and taking of ultrasounds, but it was easy and uneventful compared to the breathing and the hand exercise tests.

After that I moved to the treadmill. They put a heart monitor on me like the ones that runners use. It broadcast my pulse to a watch-like wristband which they monitored. They put the nose clip back on and I breathed through a tube attached to a machine that monitored my oxygen use. I walked briskly on the treadmill while they increased the incline about every three minutes. I was supposed to go until I got so tired that I couldn't continue, but they stopped the test after fourteen minutes. I was trying to go for fifteen minutes, but I was very happy to stop at fourteen. They were impressed at how efficiently I used oxygen. I'm guessing that's left over from when I used to swim regularly.

That was the last of the tests. By then I had a pretty bad headache and felt pretty crummy. I had planned to stop for coffee on the way home, but instead I just wanted to get home and lie down. So I drove home, and dozed for a bit. Then I had some broth with pasta in it and rested some more. After that I took some headache medicine and had some coffee. Now I feel fine.

I will have to repeat these (and all the other) tests at the end of the study too. But at least now I will know what I am getting into.

On the plus side, one of the techs had a cool t-shirt on. So I asked where I could buy one and the head test guy gave me one for free. It didn't make up for the hassle, but it is kind of cool. 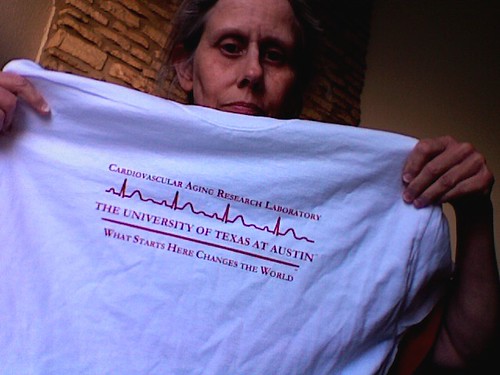 I will write about the MRI test soon. But this day was really complex, so I wanted to write about it now so I wouldn't forget.
Tags: ut study
Subscribe