One day, Ken-the-Developer, one of the people who is responsible for the development around my land, got in my face and yelled at me saying, "you are costing me money!" His logic was that, by not selling my land to him or caving in on every idiotic thing he wanted to do, I was being a Bad Person, when in fact, he was the real Bad Person.

He scraped every single living thing off of 80 acres of woodland, then he dumped tons of imported lifeless soil on top of the scraped earth and put in as many houses as the law would allow. In the process, he did everything he could to provide as little environmental protection as possible. And he did all of this this right on the edge of the river, where the runoff will harm everything living thing downstream every time it rains. It would have been slightly worse if I hadn't stepped in to complain and it would have been much worse if he had been able to destroy my land as well.

But developers and pro-growth people don't see it that way. They don't see the harm they do, or if they see it, they just don't care. They don't see the logic of using available space that was previously developed and then abandoned before using wild space that is providing watershed recharge and protection, wildlife habitat and, sometimes, housing for humans.

I got to thinking about this again when I saw the quote below in an article about how some developers are trying to force existing residents out of their homes so the developers can buy the property and make a profit putting in higher density housing. One of the local housing commisioners sees the refusal-to-leave of the current residents as an impediment to improving things. Here's the quote:

"Vela said that while he sympathized with the plight of those who might be relocated, the city was in a housing crisis and desperately needed to add housing stock for all income levels."

“'I don’t want to lose sight of the fact that if this development were to move forward, it’s a net gain of 300 housing units,' he said. 'We may be preserving the affordable housing for these families, but we’re doing that on the backs of all the other families.'”

I wonder if Comissioner Vela is volunteering to have his house and maybe his neighbors' houses torn down to make way for more high-density housing. By his logic, we all should be forced out.

Here's a picture I made of the first day of the destruction around my house. I had taken a bunch of amazing nature photos in the field of grasses and flowers that was there a couple of days before. Then I woke up and everything was being removed. I took this picture to document the beginning of the end. 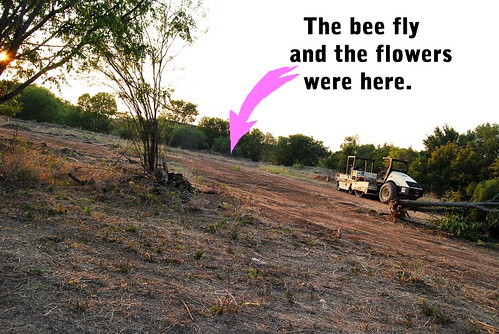